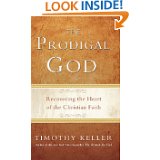 This spring some friends and I are stretching ourselves through the parable of the prodigal son (or more correctly, the parable of the two lost sons) as we simultaneously read Timothy Keller’s, The Prodigal God.  Want to join us?

Right now we’re on chapter 4:  Redefining lostness.  Here’s my synopsis of this chapter:  We who say we are Christians are just as lost as anyone living in wild, licentious, or illegal behavior if in our Christian-ness we are toeing the line, and doing good works as a means to obligate God to give us whatever we want, or to hold Him hostage if He does not.

Don’t I deserve a relatively good life if I do God’s work?  If I take my kids to church every Sunday, shouldn’t they turn out well?  If I marry a Christian, don’t I deserve to live happily ever after?  What’s more, if this is true of us, we, the compliant, “i”-dotting, “t”-crossing professors of Christ are in a much more dangerous state than our counterparts, because we are likely blind to our condition, whereas they are not.  As Keller says, if you know you’re sick, you know to get help, but if you don’t know you’re sick, you don’t do anything.

In our parable, the younger brother realizes his sin, is broken, returns to his father who honors him, and celebrates with a great feast.  The elder brother however, resents the merry-making and refuses to join in.  He feels it is unfair to honor his sinful sibling in this way, and that he is much more deserving of the honor himself.  Why?  Because he thinks he has earned it, and he does not know his own heart.

Is he (the elder brother) wrong?  Where are we in our elder brother-ness?  What good is it for anyone to live a compliant life if we can’t earn God’s favor?

Jumping Off That High Horse: A necessary exercise for combating heart trouble

How to Make Sense Out of Your Hard Times or Your Difficult Past: But-Kickers seminar, week 3

When It’s Not Your Fault but You Pay the Price: But-Kickers seminar week 2