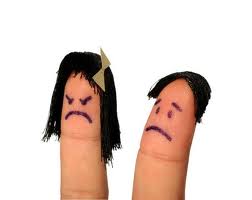 So glad someone beat me over the head about giving my husband the benefit of the doubt early on in our marriage. He’s one of those deep thinkers who conceives ideas in his flowery, sensitive right brain, but who expresses those ideas through his matter-of-fact, pragmatic left brain.

And on top of that, there’s usually an uncomfortably long pause after he begins to express himself (presumably when he realizes the potential harm in what he has already said), followed by a brief fixer-upper statement. It usually goes something like this: After I married my wife I realized she was nothing like the woman I thought I had married . . . (super long pause) . . . I realized she was so much more.

Feeling my pain? For at least 7 of our nearly 13 years of marriage, I bit my tongue, curled my toes, and plotted his death through those “super long pauses.” I often felt insulted or hurt. Giving my husband the benefit of the doubt was something I had to do intentionally–like putting a parental block on channel 58 to avoid watching CSPAN by accident when I was too lazy to get up and get the remote.

Now, 13 years later, I don’t even tune into the highly-ignitable stuff that precedes those long pauses. I just perk up my ears to make sure I don’t miss the heart of my husband in what he says after the pauses.

And I’m usually glad I did.

Does Anyone Hear You?