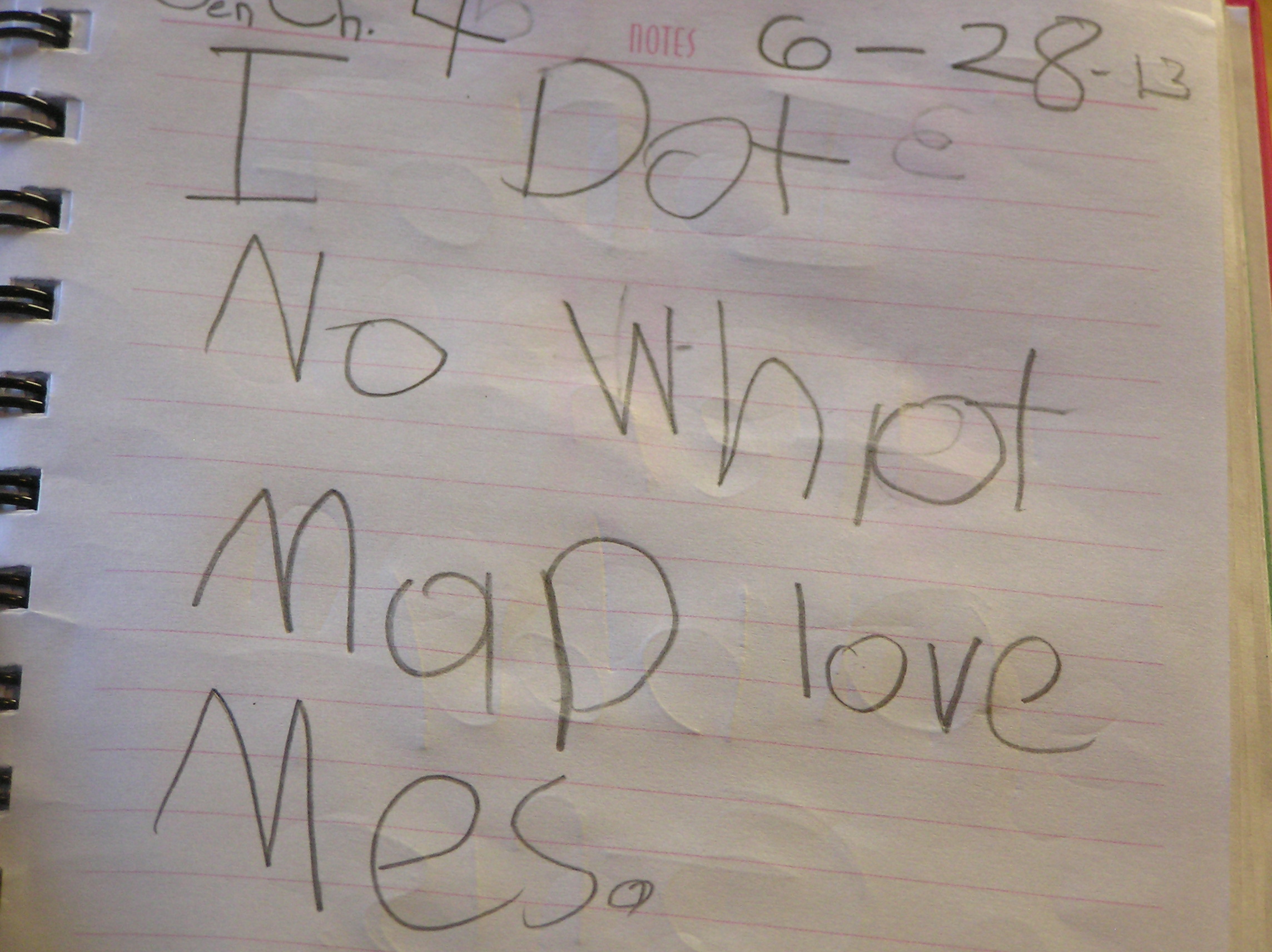 Yep–that’s what the image says: “I don’t know what ‘made love’ means.”

These last couple of months the developing of But-Kickers has been a big deal in our home. I’ve been on the lookout for “big but faith,” seeking to annihilate it wherever it lurks. And I’ve been the super-vigilant Wonder Mom who makes sure her own child doesn’t fall into that shallow belief pit that can’t put up with a cloudy day or a stubbed toe.

With the Word of God, of course. I figured, Hey, I’ll have Kaki read through the whole Bible just like I’m reading through the whole Bible, and we’ll talk over those faith issues that make you say, “Huh?” I’ll even have her write out her observations . . . So what if she’s just five weeks out of first grade?

Several days later after going through several chapters of Genesis together, I was so impressed with my little genius. She wondered what it meant to be cursed, whether snakes used to have legs or if they hopped around on their tails, and she wondered if any of the fish God created looked like Nemo.

Then came Genesis, chapter 4. By then I was thoroughly convinced Kaki could fly the plane solo. I queued up BibleGateway so she could hear the Word while following along in her Bible.

I walked away to give her a chance to work alone.

A few minutes later when I checked to see how she was doing, I found that she had already finished the chapter and written her observations. Great over-estimator of reality that I am, I was ready for Kaki to ask why Cain was so angry, why God liked some offerings but not others, and why a man would have two wives.

Instead I saw Kaki with a confused look on her face as she showed me what she had written: “I don’t know what ‘made love’ means.”

She had never gotten past verse 1: “Adam made love to his wife, Eve.”

So much for the deep theological, discussion on faith-bearing issues–at least on that day. She had one simple question.

And so I answered it with a bird, a bee, and a boatload of hugs and kisses.

Then we were done.

At least for that day.

Seriously . . . Don’t Let This Happen to You