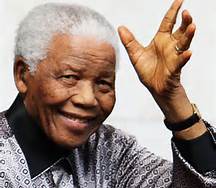 Nelson Mandela went after the heart of the oppressive Afrikaners by learning to speak their language–by expressing his sentiments to them in the same way they might to each other. He learned Afrikaans while serving a 27-year prison sentence for fighting apartheid, a system of segregationist laws instituted by the same people whose language he labored to learn. Mandela felt that though the Afrikaners were his oppressors, they were also a part of his country, and would therefore be a necessary part of any change that might take place. And because he wanted real change, he went after their hearts, not their heads.

God went after your heart

God went after your heart by speaking your language, reconciliation–the prose and poetry of your soul that longs to regain what you feel you’ve lost–that secret struggle with loneliness, doubt, and worthlessness you wish could be erased and replaced with peace, assurance, and purpose. He did this by sending Jesus Christ, his Word, THE Word–the perfect expression of who God is in a visible, tangible person. In so doing, he communicated to you on the deepest level possible. And because he wanted real change, he went after your heart, not your head.

Yesterday we lost Nelson Mandela, but we will be forever changed by his legacy and work. My prayers go out to his family and his people.

But we haven’t lost you. Whose language are you called to speak?

Nelson Mandela reveals his heart in this interview with Oprah Winfrey from the year 2000. The whole thing is priceless, but he drops the But-Kicker at 2:37. Take a look.

When a Wilde Man Weeps