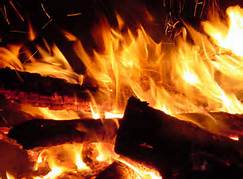 An annual tradition in the Peruvian Amazon is the burning of “pilatos”– homemade, life-size dolls that resemble the makers of the pilatos, or that resemble public figures.

The pilatos have signs around their necks that indicate what the person represented needs to change about his or her life. It might say, for instance, “Me queman por ser ladrón” They’re burning me for being a thief. The firecracker-stuffed pilatos are set on fire at midnight on New Year’s Eve.  The literal explosion of the pilato and its burning to the ground represent the destruction of pride, drunkenness, dishonesty, or whatever it is that needs to be abolished from the person’s life so that it is not brought forward into the new year.

My family adopted an abridged version of the tradition of burning pilatos a few years ago, and we have found it to be a memorable, sobering moment–even for our eight-year-old.

This year was different, however. We each had a little more than usual that we needed to be done with at the stroke of midnight, and so our burn pile was formidable.

We set the pile on fire, yet somehow it would not burn. We added more paper. More alcohol. More fire.

Finally, on the fourth try, we were successful, and the strongholds that tormented us in 2013 disappeared in an ashen heap we buried outside our front door.

Instantly I realized the releasing of ourselves from strongholds in our lives would not necessarily be as easy as setting a match to paper. We may have to go through the fire over and over again to see a sustained victory.

What a sobering thought . . . but worth it all just the same.

Redeeming the Sound of My Faith: A song for those who think they don’t belong

Burning the Pilato: What a Peruvian tradition teaches about facing your obstacles, part 2