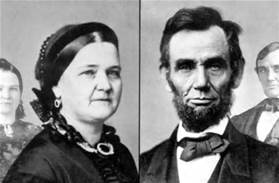 A couple of years ago my husband and I saw a commercial for Geico brand auto insurance which dramatizes a supposed conversation between Abraham Lincoln and his wife.  A short, rotund Mary Todd Lincoln primps in front of a mirror, straightens and examines her high-neck, lace-cuffed, derriere-spreading black and white taffeta dress from different angles, and then asks that dreaded question:

“Honey, does this dress make my backside look big?”

Honest Abe is caught in a quandary.

I could almost hear the tug-of-war in his head. Shouldn’t I always be truthful with my wife? Would it really be better for me to lie and risk the chance of someone else telling her the truth? If she knows I love her, who cares about some silly dress? Do I even mention that when we met I guessed her age by sizing up her girth, in the same way some determine the age of a tree by counting its rings?

He summons up enough nerve to break the news to her, and even enough cool to say it sweetly. Clearly, the last thing on earth he wants to do is hurt her feelings or provoke her to what many historians refer to as Mary Todd Lincoln’s bipolar episodes.

“Maybe just the tiniest little bit,” he says while pantomiming exactly what you picture in your mind when someone says “teeny-weeny.”

Full of disdain, and perhaps a Twinkie or two too many, Mrs. Lincoln storms off in a tizzy, insulted that her husband would say such a thing to her.

Such an unreasonable excuse for a wife, I thought—that is, until it happened to me.

And my scenario wasn’t nearly as bad as hers.

I Need a What?

One night my husband took me aside and said, “You need an intervention.”

I’m Not Ready to Be Okay with This!

My very first response was to pull a Mary Todd Lincoln. I put on my Brooklyn-girl-with-an-attitude face, rolled my eyes, put my hands on my hips, and inhaled so that I could tongue-lash and tie him up all in one breath.

But before I could say something intentionally hurtful like, “Hey, if we’re talking about looks here, you ain’t exactly stoppin’ traffic,” I heard the tail end of something that ended in, “You’re beautiful.”

What my husband had said was, “Please don’t think this has anything to do with how you look—you’re beautiful.” Then he continued, saying, “It’s just that lately you’ve been dressing overly casual at some not-so-casual affairs. You have such good things to share with people. I’d just hate to see it all overlooked because of how you’re dressed.”

Don’t you hate it when nice guys say something potentially lethal in such a nice way that they’re even nicer for having said it?

And as I pictured myself the last couple of months at special events over the holidays, I did indeed spot myself in sweatpants, oversized sweaters, and even a tattered t-shirt I wore backwards because the holes were less noticeable that way–all at the most inopportune times.

I’m really glad for that intervention, and especially for a husband who loves me enough to tell me the truth without tearing me down or attaching it to my self-worth.

But please take this as a warning:  There are lots of interventions in healthy marriages. If there aren’t, then one or both partners is spending a lot of time bound and gagged, with their head in the sand, or just downright lying.

So, if truth-telling puts you more at ease than up in arms, and if you think Mary Todd Lincoln is just a tad annoying in this video, let me be the first to tell you–you are well on your way to being ready for marriage!

Is it Your Fault Your Kids Don’t GET Christ? After you catch them red-handed, then what?

Hashtag Unbelieving Christians: 7 Questions that put your faith in perspective

3 Ways to Pray for the Children of Phillip Seymour Hoffman